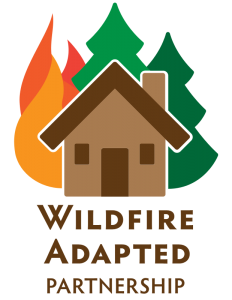 Southwest Colorado is one of those diverse and beautiful places in the West, with stark high desert landscapes of pinion and juniper forests ranging up to 14,000-foot high peaks in the San Juan Mountains.  Wildfire used to be an occasional occurrence but years of drought and the resulting beetle infestations have left the area ripe for large wildfires.  Since 2000, three of Colorado’s 10 largest wildfires have occurred in southwest Colorado.

One of those large wildfires, the 416, occurred in 2018 when the area was in an “exceptional” drought for most of the year.  By mid-May, Wildfire Adapted Partnership, a non-profit that helps homeowners understand their wildfire risk and ways to reduce that risk, had to hit the “pause” button on their free home assessment program because the demand far exceeded their capacity to complete assessments in a timely manner.

Wildfire Adapted Partnership (WAP) embodies the meaning of a grass-roots organization.  Started in 2003 with the name Firewise of Southwest Colorado, their mission has been to connect local resources and reduce wildfire risk on their terms.  WAP plays a vital role in the community effort, providing a myriad of programs for the five-county region, including  free home assessments, a cost-share program, a chipper rental rebate program, and their nationally recognized Neighborhood Ambassador Program. WAP believes that landowners need to be engaged and take responsibility, not rely on agency personnel to address  the wildfire problem.

Spring 2019 AIM funding came at an opportune time for WAP. They were anticipating another banner year of requests for home assessments since the 416 Fire impacted numerous communities. In total, the fire burned 56,000 acres and came very close to city limits. Fortunately, no homes were lost. WAP also needed additional funding for their successful cost-share program, which has been growing steadily since it began in 2016.

WAP’s Executive Director Ashley Downing said, “The AIM grant allowed us to move into the summer of 2019 with enough funding to continue to offer our existing home assessment and cost-share programs. It also allowed our mitigation specialists to work full time during the summer months when the demand is the highest.”

WAP has typically offered a 50/50 cost-share program to homeowners, however, this year switched to a 40/60 cost-share to stretch their limited funding. “We didn’t get any pushback on the lower cost-share,” reports Downing. “People were very grateful they were getting something to help offset the cost of mitigation.” With their AIM funding, WAP was able to complete 138 site visits, and 23 cost-share projects which treated a total of 33.6 acres and reimbursed homeowners $24,000.

WAP invests significant time and energy into working with residents and are always looking to improve their programs to meet the needs of the community.  A study from the Wildfire Research Team (WiRE) brought forth that the two most common barriers preventing homeowners from completing mitigation activities are lack of knowledge and the overall cost of the work.

“Our mitigation specialists have found that engaging in one-on-one discussions with residents during home site assessments offers the greatest opportunity for increasing awareness of wildfire risk and motivating wildfire preparedness actions,” said Downing. “We are extremely grateful to Coalitions and Collaboratives, Inc. and the AIM award for giving us the opportunity to continue these key elements of our program in 2019.”

Though not a part of their AIM grant, an important aspect of WAP is their nationally recognized Neighborhood Ambassador Program in which volunteers are trained to motivate and engage their neighbors around wildfire preparedness and action.  According to Durango Fire Chief Hal Doughty, “The value of the Ambassador program and WAP really came to light during the 416 Fire when the fire moved towards the Falls Creek Ranch community. Without all the mitigation work done over the years we would surely have lost homes.”  Following the 416 Fire, the National Fire Protection Association (NFPA) documented the Falls Creek success story.

Often referred to as the premier Firewise USA community in the Durango area, Falls Creek Ranch has a Community Wildfire Protection Plan (CWPP) which has been actively implemented  since its completion in 2011. They have spent several hundred thousand dollars on wildfire mitigation, sponsor community workdays and have created turnouts and enlarged cul-de-sacs for emergency apparatus and safer egress. “Their mitigation work allowed firefighters to safely conduct burnout operations and protect homes, as well as slow the forward momentum of the 416 Fire,” said Doughty.

Over the years, many organizations and communities have expressed interest in getting a similar program going. WAP is a core member of the Fire Adapted Communities Learning Network (FAC Net) and with their support, was able to develop a comprehensive guide to building a Neighborhood Ambassador Program.  The guide assists communities in identifying their specific needs and resources within their community to get a program started.

WAP held two national trainings in 2019, and the concept has been shared during Community Mitigation Assistance Team (CMAT) assignments as well. With the most recent round of AIM applications, we are starting to see the ripple effects of these trainings as two communities, Island Park, Idaho and Lake and Cook Counties in Minnesota sought funding to start Ambassador programs.

“We are very excited to see the growing interest in the Ambassador Program,” said Downing. “We have seen so many benefits here in southwest Colorado with residents taking pride in their communities, not just in terms of wildfire mitigation, but by improving access and signage as well as becoming more prepared to evacuate.” The significant wildfire mitigation work done by communities has also inspired and made it easier for the U.S. Forest Service to undertake several Good Neighbor Authority projects on their adjoining lands.

Wildfire Adapted Partnership’s efforts, including the Neighborhood Ambassador Program, definitely showcase how residents and fire managers can join together to protect lives and property, and the natural environment that they cherish.

We use cookies on our website to give you the most relevant experience by remembering your preferences and repeat visits. By clicking “Accept All”, you consent to the use of ALL the cookies. However, you may visit "Cookie Settings" to provide a controlled consent.
Cookie SettingsAccept All
Manage consent

This website uses cookies to improve your experience while you navigate through the website. Out of these, the cookies that are categorized as necessary are stored on your browser as they are essential for the working of basic functionalities of the website. We also use third-party cookies that help us analyze and understand how you use this website. These cookies will be stored in your browser only with your consent. You also have the option to opt-out of these cookies. But opting out of some of these cookies may affect your browsing experience.
Necessary Always Enabled
Necessary cookies are absolutely essential for the website to function properly. These cookies ensure basic functionalities and security features of the website, anonymously.
Functional
Functional cookies help to perform certain functionalities like sharing the content of the website on social media platforms, collect feedbacks, and other third-party features.
Performance
Performance cookies are used to understand and analyze the key performance indexes of the website which helps in delivering a better user experience for the visitors.
Analytics
Analytical cookies are used to understand how visitors interact with the website. These cookies help provide information on metrics the number of visitors, bounce rate, traffic source, etc.
Advertisement
Advertisement cookies are used to provide visitors with relevant ads and marketing campaigns. These cookies track visitors across websites and collect information to provide customized ads.
Others
Other uncategorized cookies are those that are being analyzed and have not been classified into a category as yet.
SAVE & ACCEPT